A Masterclass in Thoughtful Design...

I can hear you all gasp in disbelief! Yes, I have bought a box!
BUT...
It's not really a box! Eric described the Lock Box as a "sequential discovery puzzle box" - the answer is right there in front of you - the primary part of the description and hence the bit that came first is sequential discovery puzzle. This means that it is OK for me to buy it - I really don't object to puzzles with cavities as long as there is something special to the puzzling for me. You all know that I love SD puzzles and, of course, I am hopelessly addicted to gorgeous wood. This wondrous construction is stunning being made from Figured Waterfall Sapele with a key made from Sapele and Jatoba (plus a few bits of metal here and there. It is so beautiful that I have kept it in my living room on display - although Mrs S is starting to get impatient again with the number of puzzles building up there again.

The puzzle is a very nice size for hand holding at 3" x 4" x 1.45" (I really don't understand why you Yanks won't go metric for small linear measurement) and the key is 2.45" x 1.25" x 0.75". Eric described this as one of his best designs to date and that tipped me over the edge - there was a bit of a shenanigans at the checkout and I missed out when they first went up for sale but after a delay of a few days Eric and Tom at Cubic-dissection tried again and miraculously my cart was already full and the checkout happened seconds later...Phew! 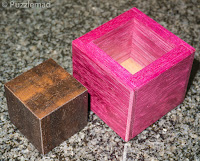 Her Majesty's Customs and Excise kidnapped it for quite a while and I had a very nervous wait on my hands before a ransom demand came via the Royal mail which I happily paid to receive my toys. Much to the disgust of "she who is thinking of lighting a fire with my 'kindling'", I also received one of Eric's Improved One Piece Packing puzzles - which remains unsolved after over a month.

The photos don't do the puzzle justice - I have never heard of Waterfall sapele before and wondered what it meant. It's just about possible to make out in the photo at the top what looks like ripples in the wood and this is what marks it out as a waterfall variant. When held in good light, it is simply gorgeous. I had read the review by Brent Hessel and he awarded it the full five Sinatras and then I read my surgical friend, Steve's gushing Dr Seuss opinion, which meant that I had to start on this one straight away.

Looking in the keyhole, it looks like he has made a set of internal pathways for the pins of the key to interact with - I did wonder whether he might have made a sort of inverted wooden Revomaze. Of course, with any lock puzzle that comes with a key, it is obligatory to try the key in the keyway and turn. Will something unlock quickly that way?

Of course nothing will happen when you turn the key! In fact, it turns only about 40º and in the wrong direction. Time to investigate further. There are not supposed to be any moves that require banging or force or gravity which helps because when turning the puzzle over and over, there are quite a lot of interesting clanking noises inside and sometimes not any clanking noises...odd!

It will come as no surprise that there are magnets in this - the pins of the key clanked onto a steel wire puzzle that was sitting on my armchair next to me. In fact when I pulled the key off the wire puzzle one of the pins came out - yes, its a teeny tiny spoiler to show it but not much of a spoiler so I will show it:

This gives the puzzle a HUGE number of extra possibilities - time to put the key back in with the pins removed and...NOPE!  What about moving the pins into different positions and orientations? Aha! Interesting things happen inside except I cannot tell what is happening. There is clanking and clinking inside but nothing changing externally. It doesn't take long to realise that the hole on the key is useful for something and then there are even more possibilities which produce more completely incomprehensible internal changes - I love it and I am stuck!

Several weeks go by in which I systematically try almost every possible combination of pieces, orientations and directions possible with no progress. At some point in that period, I work out what combinations produce what noises most of the time but at other times there are some really big noises in there and I think Eric is playing with me. Earlier this week I find a thing which causes something externally to happen and after that little buzz of excitement, I am stuck again.

I chat to the genius that is Derek Bosch and during a few evenings of discussion he tells me that he manages to solve it! OMG, I am so thick! He gives a little innocuous hint and I realise that Eric has been an evil bastard and pushed me into doing something stupid in the full knowledge that I will do that something again and again and again. Eric knows I'm not terribly bright. Derek's hint is very meagre and it still takes me nearly an hour to work out what he is getting at and I see the amazing misdirection that has been designed into the puzzle. It required not only a configuration change but also an interaction in an unexpected way to produce a movement that I wasn't expecting - brilliant! Now if that gives you any real clue then you also are a genius because I can barely understand that paragraph and I wrote it.

Having used Derek's meagre clue, I have ,ade progress and I continue to try all the things I had done before all over again with the box configured differently. As usual, I have clanking about and no further movement. But this time I think I know what is going on inside and want to try something extra. The problem is I am missing a tool to do that extra something. Now what? Maybe of I can...oooooh...Aha! Now that was a clever piece of design and with a little fiddling and some rather fine dexterity, I make a move. Solved! There's no real clue in the next photo but don't look if you really don't want any information at all.

This explained some of the noises inside but not all. Somehow something didn't feel quite right. That last unlocking move had been very clever (especially in how it made me use what I had already got) but there was too much dexterity involved and Eric very seldom designs puzzles that require luck or dexterity. Time to think© again. What did I have? What special properties did it have? Could I use it differently? OMG - YES! I tried the last move again but differently and there was a little wobble and resistance before a click and I sighed with delight!

This Sequential discovery puzzle box is a masterpiece - both in the craftsmanship and the woods used to make it beautiful but also in the attention to detail in the design inside. Every single step has been designed to be hidden and require experimentation, discovery and thought before revealing its' secret. This is simply wonderful and a candidate for my top 10ish of the year in 2020. This year has been a car crash so far but tremendous puzzles like this have helped take my mind off the awful goings on around the globe.